On Wednesday 22nd June, the pupils and staff of Rusheen N.S. celebrated the retirement of our School Principal, Mr. Coakley in the garden.  He had spent 8 years as a pupil and 30 years as a teacher in the school.  Mr. Coakley was treated to some fabulous entertainment with all the various class groupings singing songs, saying poems, playing tin whistles and performing dances.  All the teachers paid tribute to Mr. Coakley and thanked him for everything he had done in the school.  Then the pupils sang a song  “Slán Mr. Coakley” which was written by Mrs. O’Mahony for the occasion.  He received a copy of Rusheen’s “We Are Writers” book with each pupil autographing their own story.  He was also presented with a lovely scrapbook in which every pupil had written their favourite memory of Mr. Coakley.  Mr. Coakley then thanked all the pupils for their fabulous entertainment and for being such wonderful students over the years and making his job so easy.  He paid glowing tributes to all his staff also for their hard work, dedication and friendship during his time in Rusheen N.S.  He also gave a small gift to each of the classes.  After all this we watched a power point presentation which contained lots of photos showing many events that happened during Mr. Coakley’s time in the school.  Mr. Coakley was then presented with a cake and Ina received a beautiful bouquet of flowers.  The pupils got sweets and extra playtime and the staff enjoyed in picnic in the yard.  It was a memorable day for everyone in Rusheen N.S. 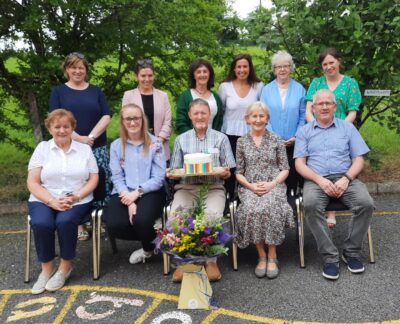 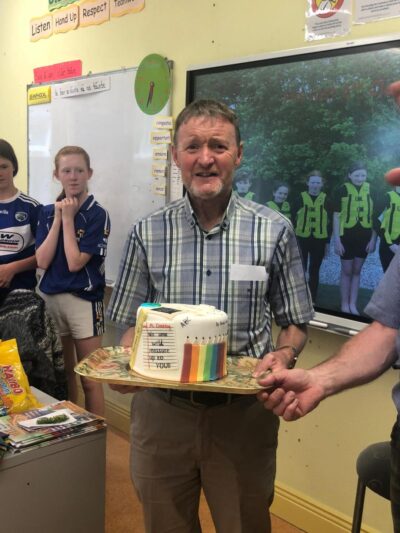