On Thursday the 29th of November Learnit Lego S.T.E.M. Workshop was held in the local hall in Rusheen.    The first classes to go up to the hall were junior and senior infants followed by first and second and they were followed by third and fourth and lastly were fifth and sixth class.  When we went up to the hall Fergal told us that we were going to make Robots.  After that he told us to get in groups of three and we got to work.  We took out all the pieces of lego and there was an app on the laptop and it had all the instructions on it.  After 45 minutes all our robots were complete.  We had to program our robot so that it could drive forwards, backwards and turn.  When all our robots were complete and programmed they gave us a maze for the robot to complete.  We did not have enough time to complete the maze but in the end we had a great day.

The photo shows 6th class having fun with their robots. 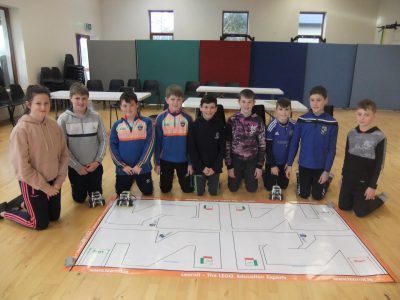